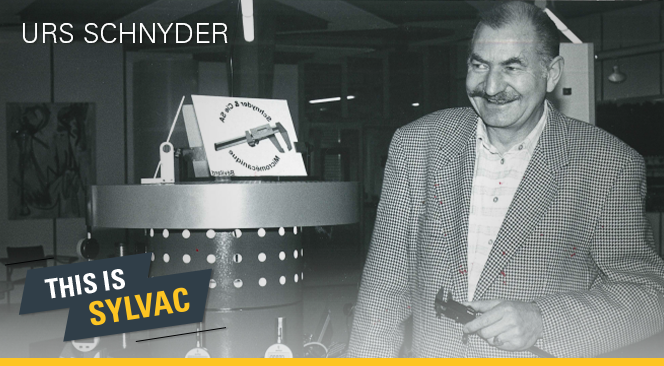 Urs Schnyder, one of the founders of Sylvac, was the brilliant mechanic of the team he formed with his cousin and uncle. He counted for the company, which benefited from his extraordinary know-how in precision mechanics. As an apprentice, he machined watch parts in the cellar of his parent's house to make a little money. He then set up the micromechanics workshop that would become Sylvac with the support of his uncle Hans Meyer. The latter will place one order after another, allowing Urs Schnyder to familiarize himself with the world of dimensional measurement.

It is to Urs Schnyder that Sylvac owes the precision of his rules. Based on a method quite similar to that used for electronic circuits, their manufacture and marketing gave Sylvac a long lead over its competitors.

An entrepreneur at heart and a virtuoso in interpersonal relations, Urs Schnyder is remembered as someone who was intuitive, who understood people particularly well, which (almost) always helped him make the right decisions.

In 1969 he founded the precision engineering company that became Sylvac together with his uncle Hans Meyer, to whom he was very close.